The Ugly Truth About Multitasking 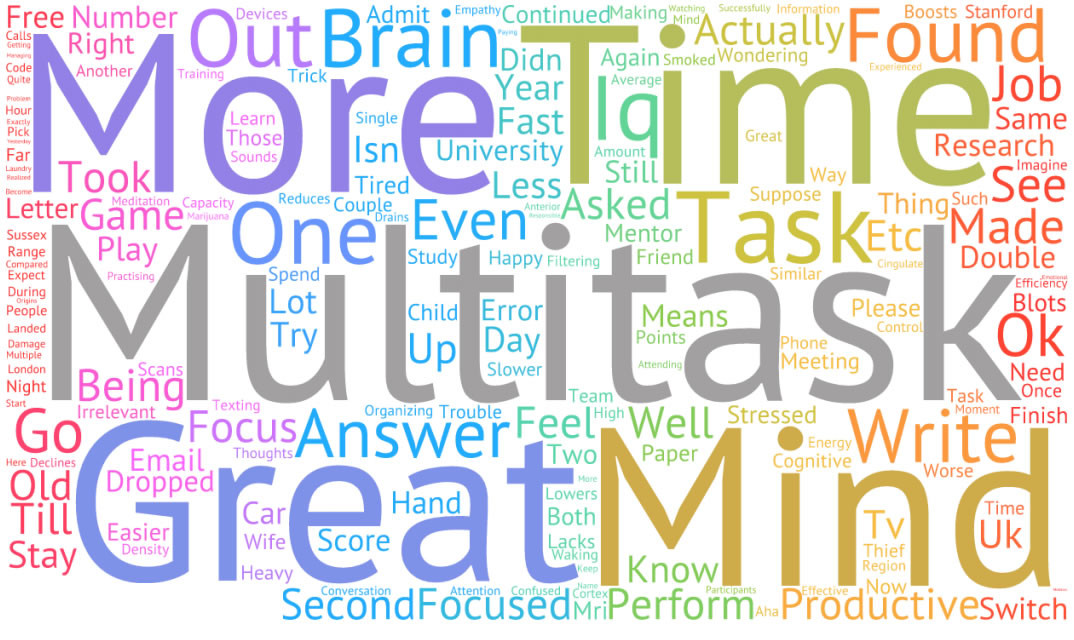 The Ugly Truth About Multitasking

Being a multitasker was great… till the day my mentor dropped by and asked me to play a game with him.

He asked: Please write “I am a great multitasker” and then write the numbers from 1 to 20 as fast as you can.

He timed me again and this time took me 39 seconds; more than double.

"So my friend being a great multitasker means you need about double time to finish the job, while making more mistakes and while feeling more stressed and tired too! That’s great…"

Do you know that there’s this Stanford University research that has found out that heavy multitaskers — those who multitask a lot and feel that it boosts their performance — were actually performed worse because they had more trouble organizing their thoughts and filtering out irrelevant information?
They were even slower at switching from one task to another. Can you imagine that?

Multitasking reduces your efficiency and performance because your brain can only focus on one thing at a time. When you try to do two things at once, your brain lacks the capacity to perform both tasks successfully.You see your brain cannot actually multitask it can actually switch-task.

Multitasking not only lowers your IQ; it can even damage your brain too!

A study at the University of London found that participants who multitasked during cognitive tasks experienced IQ score declines that were similar to what they’d expect if they had smoked marijuana or stayed up all night.
Their IQ score dropped of 15 points and landed to the average range of an 8-year-old child.

Researchers at the University of Sussex in the UK compared the amount of time people spend on multiple devices (such as texting while watching TV) to MRI scans of their brains. They found that high multitaskers had less brain density in the anterior cingulate cortex, a region responsible for empathy as well as cognitive and emotional control.

That was an aha moment for me...

I realized that multitasking is actually a productivity thief that drains my productivity and my energy!
But I was quite confused; my job means answering emails getting phone calls, attending meetings, managing my team and writing some code too!

I cannot focus on a single task even I just found out that it’s far more effective.

The answer is exactly what you said - it’s about focusing…
Research has found out that 43% of your waking time your mind is wondering.
The problem is that even when you are answering to an email your mind isn’t 100% focused at your task at hand; it’s wondering on the meeting that you are about to have in an a hour the conversation that you had yesterday with your wife and when you are going to pick your car from the laundry.

The trick to become more productive and less stressed is to learn how to keep your mind focused just at the task in hand.

That sounds great; but how can I focus my mind?

The name of the game is mindfulness; it’s about training your mind to stay focused

Mindfulness is about paying attention in a systematic way; it originates from meditation, it's more than 2000 years old and next week you're going to have a taste of it...